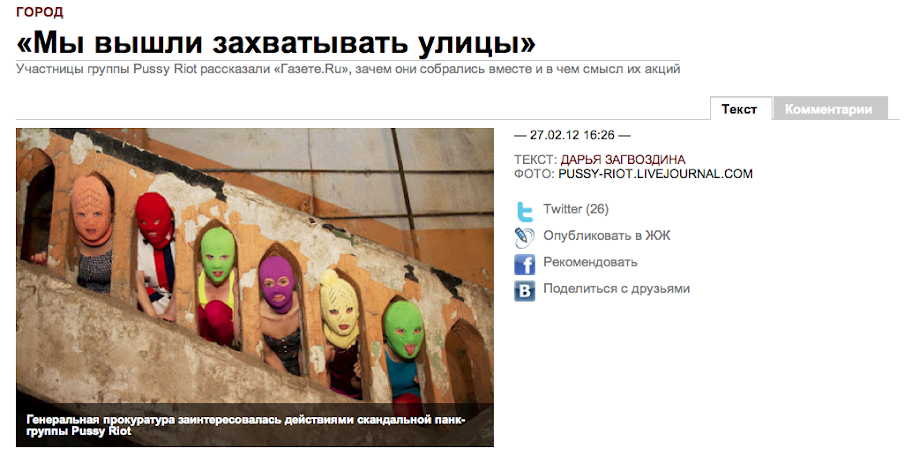 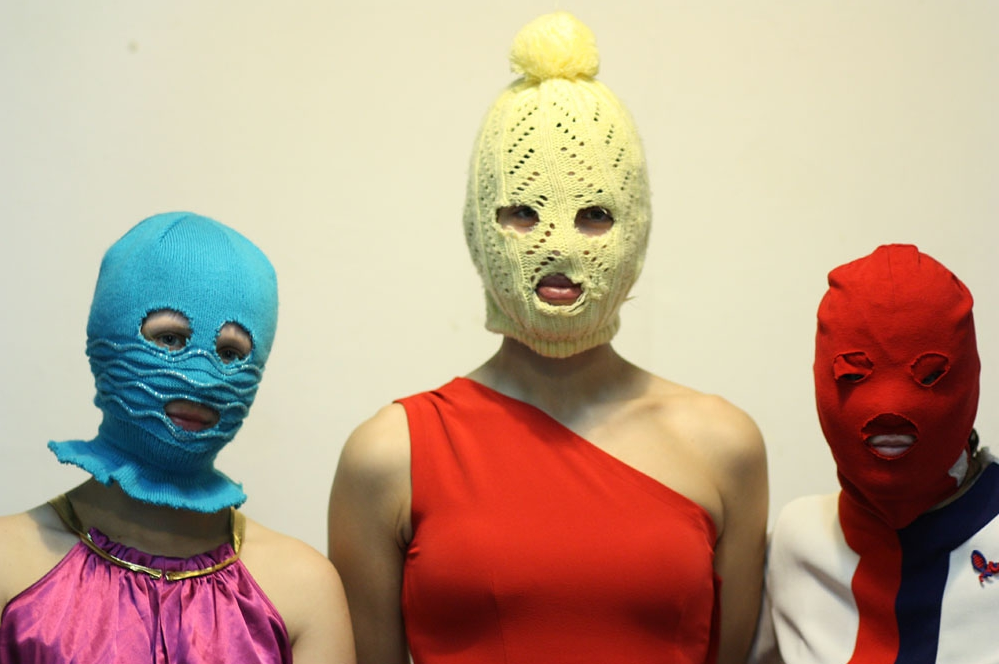 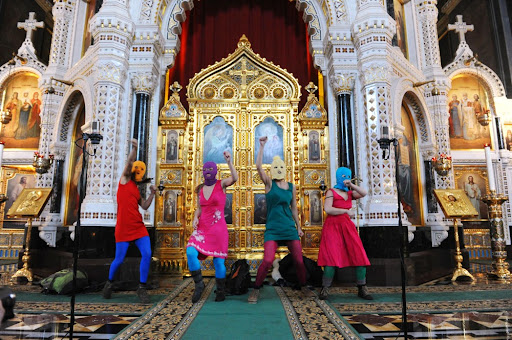 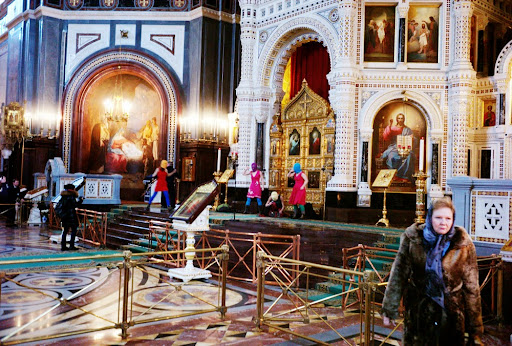 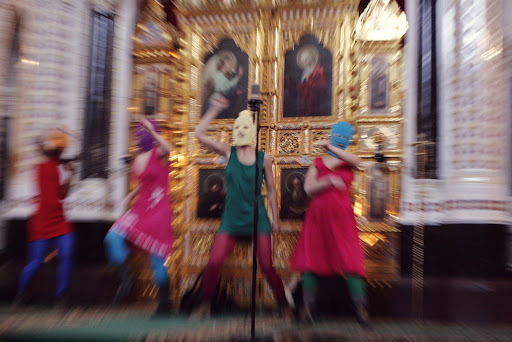 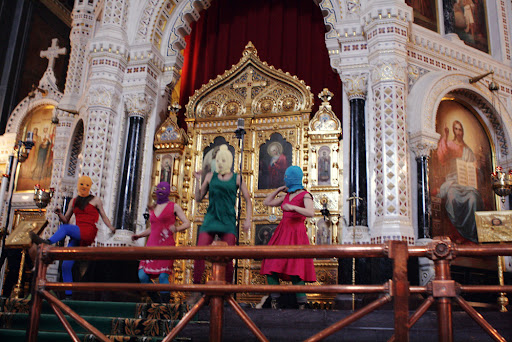 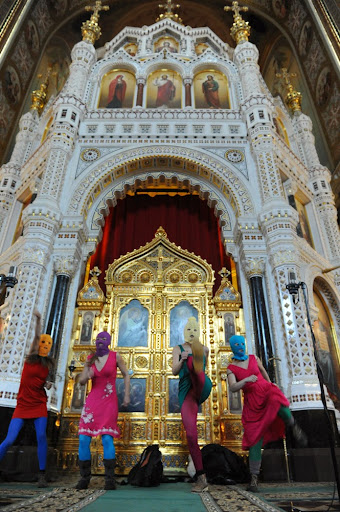 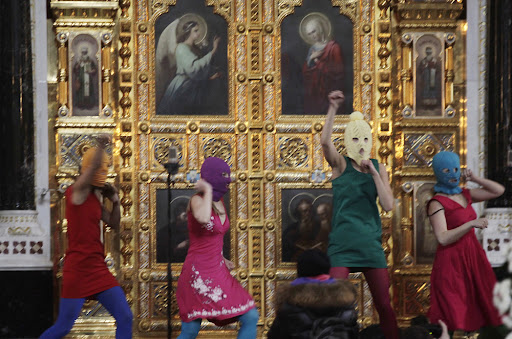 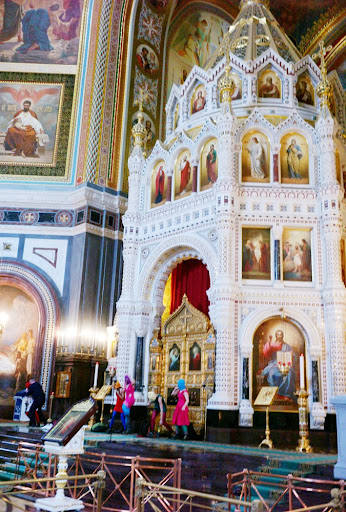 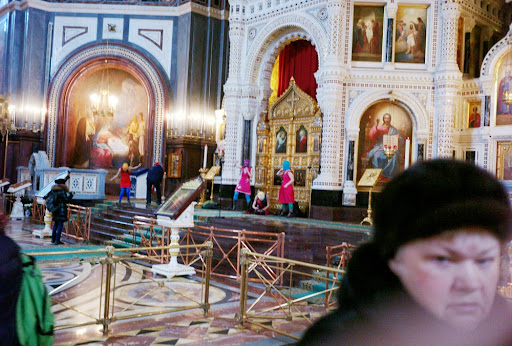 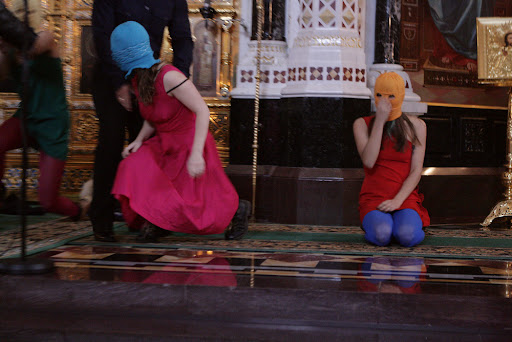 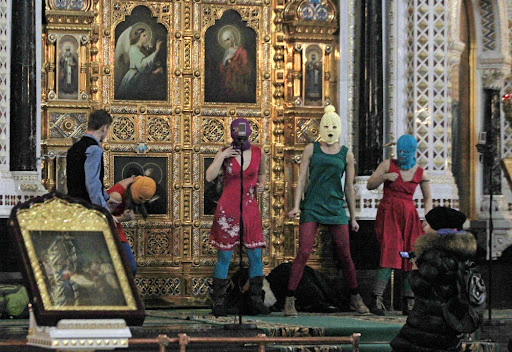 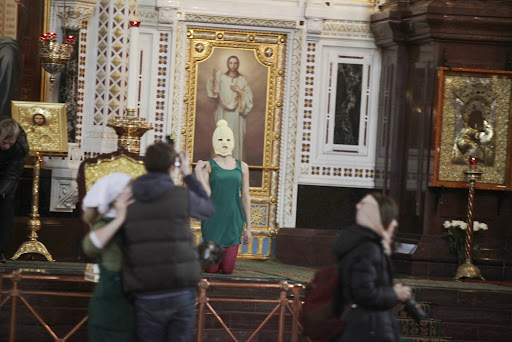 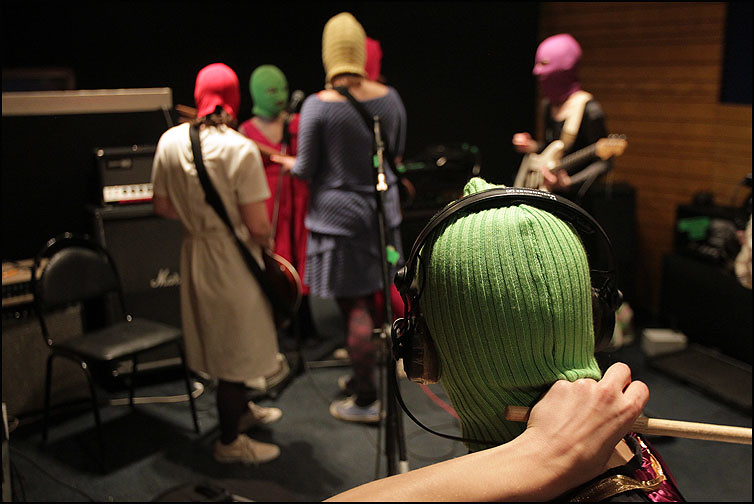 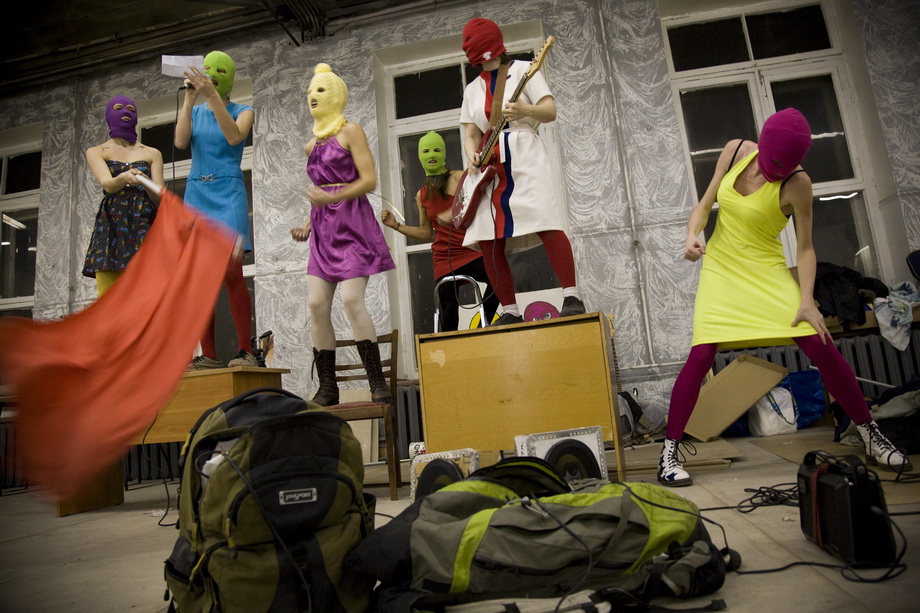 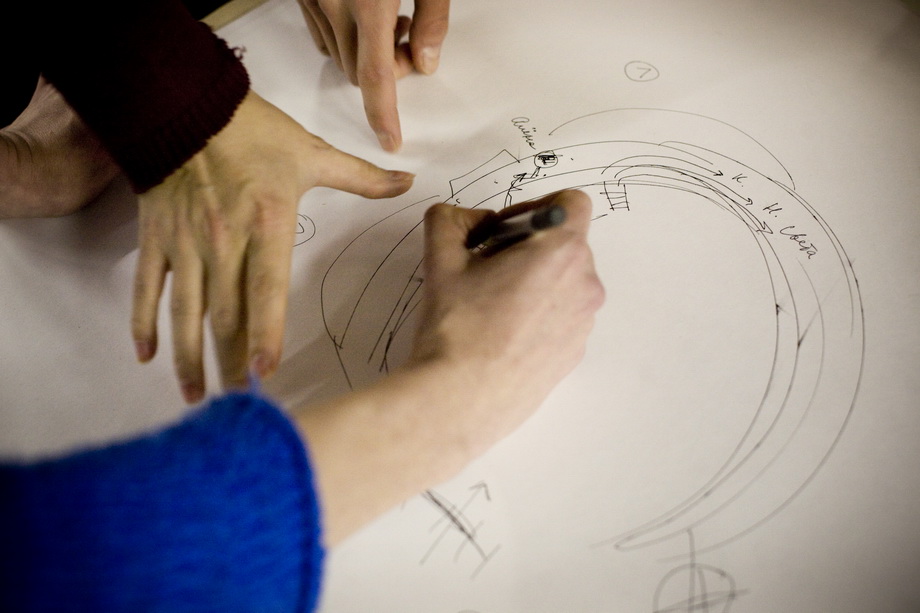 FEMALE FURY
The latest sensation on the Russian underground music scene talks about its songs. 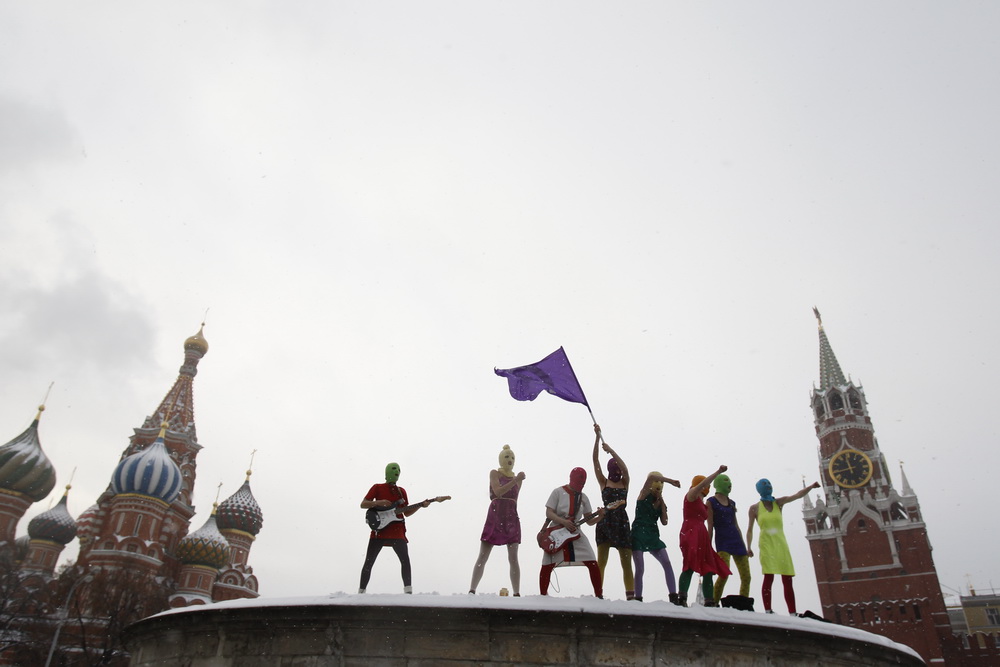 Pussy Riot, a feminist punk collective from Moscow whose members hide their faces behind colored balaclavas, creates waves of protest through its dissident songs and unsanctioned performances — which culminated late last month in a brief unauthorized concert on Moscow’s strictly guarded Red Square.

The group, which performed a freshly penned anti-Kremlin song called “Putin Got Scared” (Putin Zassal) — complete with colored smoke bombs and a purple feminist flag — was arrested and, after being held for about five hours in a police precinct, two members were fined 500 rubles (around $17) each. The members were charged with holding an unauthorized rally.

“Red Square is symbolically the main place of the country; we believe that it is the place that should be occupied to achieve a real political change, it’s the equivalent of Tahrir for Russia,” Pussy Riot said in an email interview this week.

In an email, a member who calls herself Garadzha Matveyeva said that the group answered the questions collectively — just as it writes its songs.

For the Red Square performance, the group chose as its stage Lobnoye Mesto — a 13-meter-long stone platform previously used for announcing the tsar’s ukases — as a reference to the historic demonstration of seven Soviet dissidents who came to the site with the slogan “For our freedom and yours” to protest against the Soviet invasion of Czechoslovakia on August 25, 1968. The dissidents subsequently spent years in prisons, psychiatric asylums and in exile.

“We believe that the Soviet Union’s aggressive imperial politics are similar in many ways to Putin’s course,” Pussy Riot said.

“The way the state treats its citizens hasn’t changed much since the times of the U.S.S.R.; there is still paternalist supervision and police control over people. Secondly, we always try to choose elevated platforms — similar to a concert stage — so Lobnoye Mesto met our needs in this sense.”

“Putin Got Scared” was inspired by the spontaneous, unsanctioned protests against the rigged State Duma elections in December.

“The song was written in the aftermath of the Dec. 5 events and is permeated with the radical mood of protest of that day, when after a 10,000-strong rally on Chistiye Prudy a number of protesters managed to break through the OMON police cordons and around 1,000 marched almost to the Kremlin itself,” the group said.

“The police were at a loss, they didn’t know what to do; they were waiting for orders in astonishment and didn’t dare touch the protesters. The orders to detain the demonstrators didn’t come until the people had already reached the Kremlin, half an hour after the march had begun. The authorities were frightened.

“The orders to bring armed troops to Moscow came immediately. Special detachments were put on alert. It was clear that Putin had got scared.”

Although the two authorized anti-fraud rallies that followed in December drew more than 100,000 each, Pussy Riot believes that they did not have as much of an effect as the unsanctioned protests.

“All the troops were taken out of Moscow on Dec. 10; when it became clear that the opposition had made large concessions, Putin calmed down, unfortunately,” the group said.

“As far as we can see, Putin is scared only of unsanctioned rallies. That’s why we promote holding unauthorized protests in our songs. We are not happy about what happens in the sphere of civic protests, which have now turned into sanctioned rallies.

“The authorities will not get scared and make concessions because they are rallies that they sanctioned themselves. On the contrary, such rallies show that the authorities are allegedly tolerant toward people, that they are ready to listen to them and provide them with public platforms. But in reality, the authorities turn a deaf ear to all the protesters’ demands and none of the claims set up at the rallies have been fulfilled.”

Pussy Riot believes that more unsanctioned rallies will follow in view of the upcoming presidential elections.

“It’s very likely that most radically-minded people will be isolated (arrested, put in prison) — such as the Natsbols [members of the oppositional Other Russia party] or [left-wing activist] Sergei Udaltsov,” the group said.

“What happens after the elections depends on those tens of thousands of people who come to sanctioned rallies and marches now; we hope that the violations, fraud and falsifications that follow will force people to take action not sanctioned by the authorities.”

According to the group, the song “Putin Got Scared” celebrates the feminist capture of the Kremlin.

“It was cold on that day, it was a real Russian winter, and we and our equipment got really cold,” Pussy Riot said.

“But this angered us even more, so the girls screamed so furiously that the policemen were scared to come up to us at first.”

The video of the performance became an instant YouTube hit, while the blog entry containing photos and links to the videos, lyrics and the group’s commentary received more than 1,100 comments.

“As we saw from the responses to our video, many Russian citizens want Putin to get scared once again and for a long time,” Pussy Riot said.

“The grassroots protest force is more radically-minded than official rally organizers imagine. We believe that a large number of people are ready to demonstrate without a sanction. People were happy to share the quotes from our songs: ‘The time for a subversive clash has come,’ ‘Live on Red Square / Show the freedom of civil anger.’”

The group — which features from three to eight performers — sees itself as being “on the border between punk rock and contemporary art.”

“Contemporary culture is characterized by diffusivity, mutual influence and the interaction of different directions, the intersection that leads to transgression,” Pussy Riot says.

“It’s possible to find features of 1990s Actionism in our performances, while the motif of the closed face of the performer — which has been used by many music bands such as Slipknot, Daft Punk or Asian Women on the Telephone, for instance, is borrowed from conceptual art where the tradition of not showing one’s face is present.”

Pussy Riot officially formed in autumn 2011 when it played its first gig in Otradnoye metro, performing the song “Clear Up the Pavement” (Osvobodi Bruschatku). Complete with footage from performances at other metro stations as well as on bus roofs and trolleybuses, the video was released on Nov. 7, the anniversary of the 1917 Russian Revolution.

According to the group, one of the events that led them to form Pussy Riot was Putin and Medvedev’s announcement made to the United Russia party congress on Sept. 25 that they would change posts in the upcoming presidential elections due on March 4. The move has been compared to castling in chess, when a rook and a king swap places. “We don’t like this kind of chess,” Pussy Riot said.

Since then, Pussy Riot has held unsanctioned performances in boutiques and at a fashion show as well as on the roof of a garage next to the detention center where the imprisoned participants of anti-fraud rallies were held. They unveiled a banner, lit flares and performed a song called “Death to Prison, Freedom to Protest” and escaped without being arrested.

The group cites American punk rock band Bikini Kill and its Riot Grrrl movement as an inspiration, but says there are plenty of differences between them and Bikini Kill.

“What we have in common is impudence, politically loaded lyrics, the importance of feminist discourse, non-standard female image,” Pussy Riot said.

“The difference is that Bikini Kill performed at specific music venues, while we hold unsanctioned concerts. On the whole, Riot Grrrl was closely linked to Western cultural institutions, whose equivalents don’t exist in Russia.

Pussy Riot’s unsanctioned concerts are reminiscent of The Sex Pistols’ infamous boat concert, when the band rented a boat to premiere “God Save the Queen” to spoof the Queen’s Silver Jubiliee in 1977, by playing live on the Thames, passing Westminster Pier and the Houses of Parliament.

“In this story with the Sex Pistols we find it odd that the boat was rented by the band itself,” Pussy Riot said.

“It’s difficult to find an element of protest when you perform on a boat that you have paid for; on the contrary, it’s a type of commercial performance. There’s no connection to Pussy Riot in this, because we didn’t rent and are not going to rent anything; we come and take over platforms that don’t belong to us and use them for free.”

Although Pussy Riot conceals its faces and identities, the group revealed that the members’ average age is 25 and they have a background in music, theater, art — and mountain climbing. One member works in the electronics industry.

“We are united by feminism, opposition to Putin’s regime and his vertical of power, antiauthoritarianism and leftist ideas,” Pussy Riot said.

“Some of us are anarchists, some have leftist liberal positions. We would like horizontal political activity, self-organization and the capability to be aware of oneself as an equal participant in civil politics, to understand one’s rights and fight for them to develop. Russian society lacks tolerance and lenience.

“We are concerned about the centralization of political life and all the problems that stem from it. It’s obvious that a single center can’t take the specifics of every region into consideration, that’s why it’s important to develop regional self-governance.

“We are concerned about the educational reform that would make even high school education a partly paid service, and health reform that promotes such dubious things as an anti-abortion law. We don’t like the lack of cultural institutions, and the fact that no conditions for their development have been created. We are concerned about widespread sexist thinking, which reduces the diversity of people’s lives to sexual roles.”

According to the group, it would like to influence the cultural situation that forms public consciousness.

“We alter the approach to specific particular subjects such as LGBT, feminism and civic protest activity,” Pussy Riot said.

“Our motivation is ethical; we see that entire strata of population find themselves under unjustified discriminatory pressure. For instance, conservativeness dictates a definite role for a woman, which is guaranteed by social mechanisms of encouragement and punishment. This role doesn’t allow her to fulfill herself in another, alternative way that doesn’t correspond to the ideals of classic femininity.”

Although Pussy Riot’s performances have been classified by the police as “unsanctioned rallies,” the group said it was the counter-extremism Center E, described as “Putin’s political police” that harasses it most.

“Ordinary policemen are not as annoying and bothersome as Center E,” the group said.

“Center E taps our telephones, breaks into our email and tries its best to prevent our concerts.” 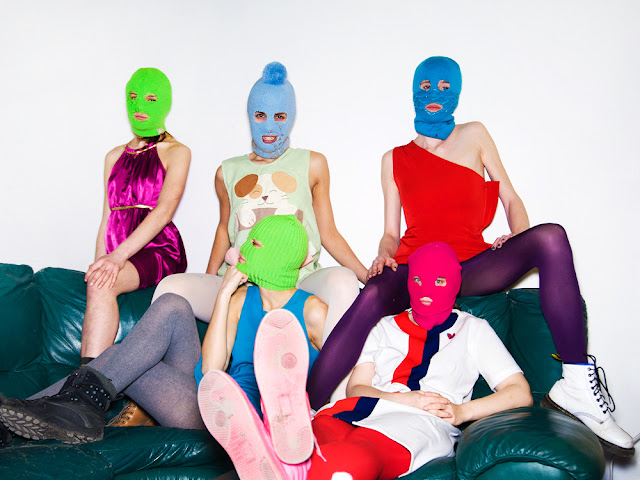 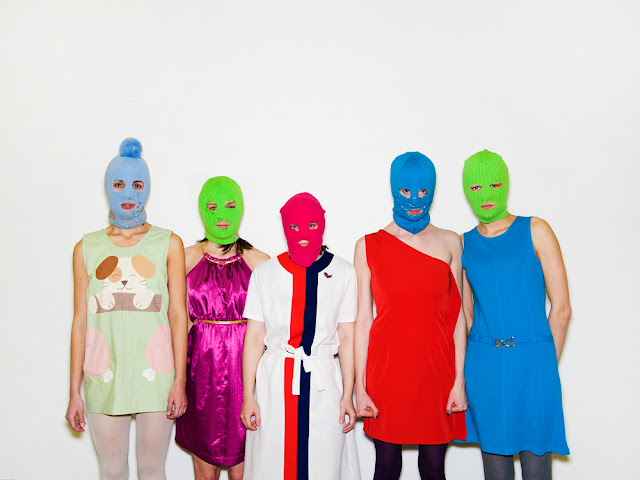 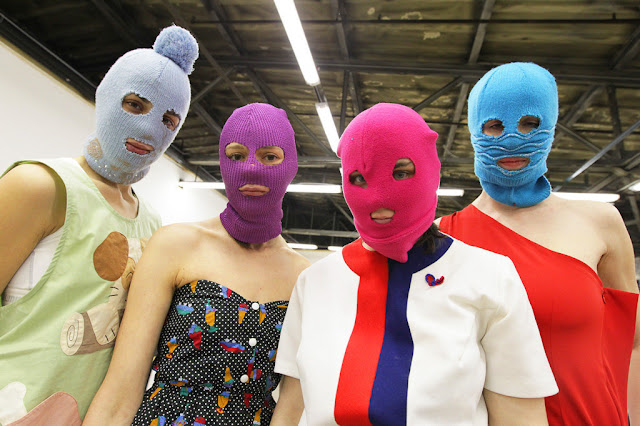